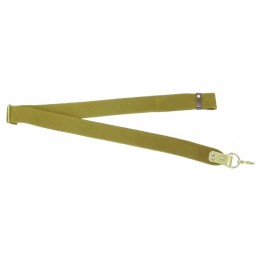 Carrying strap for Kalashnikov or SVD 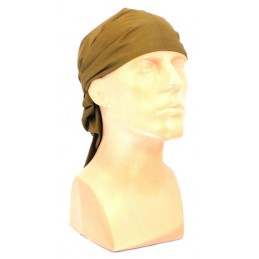 Original Soviet medical scarf, using by soldiers as the bandana. Made cotton in colour olive. 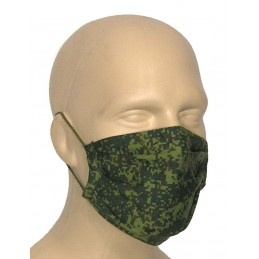 Protective face mask made from cotton. Fixing by rubbers. With the hole letting for putting the HEPA or microfibre filter . Possibility multiple use - after washing and ironing. 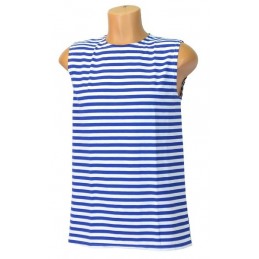 Cotton shirt - so called "Mayka". White and blue, for airborne troops - VDV. Made from 100% cotton.

Plastic button "Canadian". Sewn with the tape for widths 10 mm.

The Medal of Nakhimov was a Soviet military award created on March 3, 1944 by decision of the Supreme Soviet of the USSR to reward distinction in the defense of the socialist homeland and to actively recognize successful combat missions on ships, in units of the Navy or of Border Guards.

The offered medal has the number 5000.

The Medal of Nakhimov was a Soviet military award created on March 3, 1944 by decision of the Supreme Soviet of the USSR to reward distinction in the defense of the socialist homeland and to actively recognize successful combat missions on ships, in units of the Navy or of Border Guards.

The Medal of Nakhimov was awarded to sailors and soldiers, petty officers and sergeants, ensigns and warrant officers of the Soviet Navy, Naval Infantry and naval units of the Soviet Border Troops.
Several times this medal was also awarded to Fleet officers. There were also cases of re-awarding this medal to one person.

Terms to award the Medal of Nakhimow:
- For skilful, entrepreneurial and bold actions, conducive to the successful execution of combat tasks of ships and naval groupings at maritime theaters of action;
- For bravery demonstrated at the defense of the state sea border of the USSR;
- For sacrifice demonstrated at the performance of military duties or for other merits during military service under conditions related to exposure to life.

The Medal of Nakhimov was a 36mm in diameter circular bronze medal with a raised rim. The obverse had at its center the relief left profile bust of admiral Nakhimov, surrounded by small beading (110) along the entire medal circumference, also along the circumference, in the upper half on either side of the bust, the relief inscription "ADMIRAL NAKHIMOV", in the lower half, a relief five pointed star over laurel branches. The reverse bore the same small beading (111) along the entire circumference. At the center a medallion bearing a sailing ship surrounded by a ring of rope over crossed naval anchors connected together by a circular chain surrounding the medallion and passing below the lower tips of the anchors. The Medal is suspended from a standard Soviet pentagonal mount by a ring through the suspension loop. The mount was covered by an overlapping 24mm wide silk moiré blue ribbon with three central 3mm wide white stripes situated 2mm apart.
Authors of the drawing of the medal - artists A. L. Diorov, B. M. Khomich and N. A. Volkov. The number of the medal was engraved, and then punched down on the rim.

During the Great Patriotic War, the Presidium of the Supreme Soviet of the USSR has assigned the right to award the medal of Nakhimov to the Naval Command - the commanders of fleets, flotillas, squadrons, fleet‘s air force, defense areas, the commanders of navy, artillery and air brigades, marines and regiments had the right to be awarded.

The offered medal has the number 5000.

Link to the site with description and quote in Russian: http://southklad.ru/katalogi/medali-i-ordena-sssr/medal-nahimova.html

16 other products in the same category: 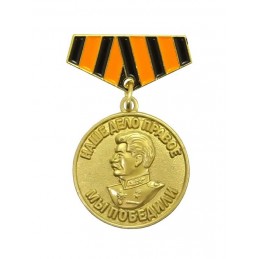 Miniature of the medal "For the Victory over Germany"

Miniature of the medal "For the Victory over Germany". On the obverse the bust of Stalin and the inscription "Our right matter, we won" and on the reverse inscription "For the Victory over Germany in the Great Fatherland War 1941-1945". The medal was granted soldiers participating in crossing the Oder river and fights in Germany in April and May 1945. 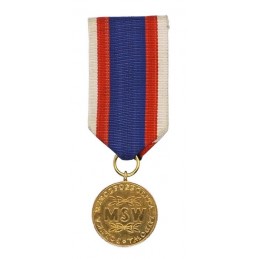 Medal awarded to service-members of the Militia, ORMO and other members &amp; soldiers of the Ministry of Internal Affairs. Medal created in 1974. 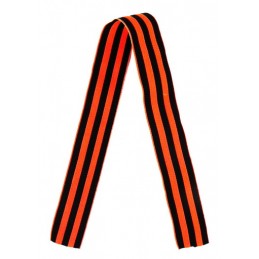 Ribbon to the St. George orden – used in the USSR with the "Order Slavy" (Glory orden) and "Victory over Germany" medal. Ribbon also used to decorate civilian attire, portraits, and headstones. They are being used also by soldiers and "Polite People" on the Crimea and Ukraine. 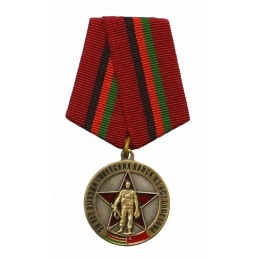 Contemporary medal granted soldiers participating in the war in Afghanistan. On the obverse soldier relating to the star, the flag of Afghanistan and the USSR and the inscription of "30 years of the exit of Soviet Armies from Afghanistan". On the reverse inscriptions "Duty filled up with the Honour" and "for Soldier - Internationalist". 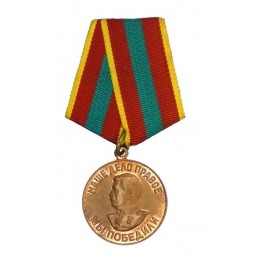 Medal "For the dedicated work during the Motherland War", 70's years

Medal awarded to workers with great commitment to the work during the World War II. On the avers inscription in Russian "Наше Дело Правое - мы Победили" ("Our Case is Right - we Wined") and portrait of Joseph Stalin, on the reverse "За доблестный труд в Великой Отечественной Войне 1941-1945 гг" ("For the dedicated work in the time of the Great Patriotic... 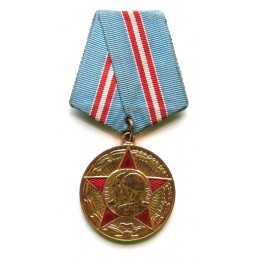 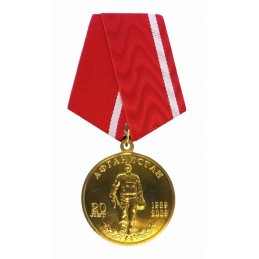 Medal "20 years of Leaving of Soviet Armies from Afghanistan"

Medal granted participants in the War in Afghanistan by 1979-1989. On the obverse it to appear the soldier and inscriptions "Afghanistan - 20 years - 1989-2009". On the reverse inscription "40 Army - Exit of Soviet Armies from Afghanistan".

Miniature of the medal - "Gold Star" ("Hero of the Soviet Union") 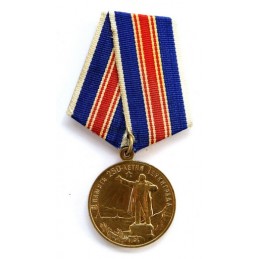 Medal "In memorial of 250 years of Leningrad"

Commemorative Medal from 1953. Awarded during the 250th anniversary of the foundation of St. Petersburg (later Leningrad, now Petersburg). „W pamiat 250-lietia Lieningrada” (In memorial of 250 years of Leningrad) on the front side, and „Gorodu-Gieroju Slawa! 250” („Glory to the hero-city! 250”) on the backside. 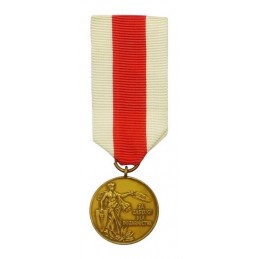 Medal "Merit for the fire-fighting", brown

Decorating for the service in the fight against the fire and the development of the fire-fighting. The III step - brown.

Modern medal granted soldiers of the air force which fought into the War in Syria. On the obverse the flag of Syria and Russia, two planes, the map of Syria, the emblem of Aviation and the inscription "For the participation in the war operation in Syria". On the reverse inscription - "For the distinction (at the service)" ("За отличие"). 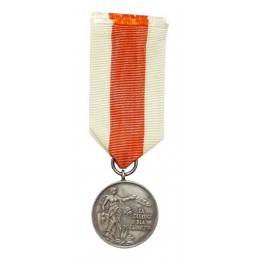 Medal "Merit for the fire-fighting", silver

Decorating for the service in the fight against the fire and the development of the fire-fighting. The II step - silver. 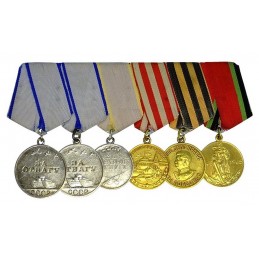 Set of medals on special pad, so-called spange. Two medals "For the Courage", and one each "For Battle Service", "For the Defence of Moscow", "For the Victory over Germany" and "20 Years of the Victory". Numbers of medals are calling the veteran of fights on in 1941-42 years, which next was moved to the work in the distance at the front.

Medal "For the Service in Spetsnaz"

Medal awarded to soldiers doing the service in units of Spetsnaz. On the obverse inscription "For the Service in Spetsnaz", and on the reverse "Homeland, Bravery, Honour, Fame". In the set form of the card. 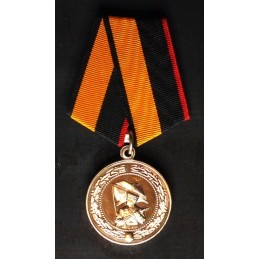 Medal "For Service in Marine Infantry"

Medal granted for Marines. On the obverse it to appear of soldier relating to the flag of the Fleet. On the reverse inscription "Ministry of Defense of the Russian Federation - for the Service in Marines". 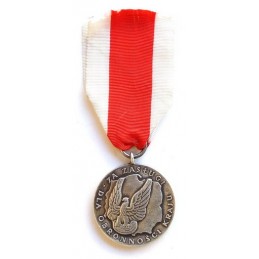 Medal for "Merit in Defending the Country" - Silver

Medal from 1986. Awarded to soldiers and activists who distinguished themselves during their service - Silver - II class.

Are you sure that you want to report this comment?

Your report has been submitted and will be considered by a moderator.

error Your report cannot be sent

Your comment has been submitted and will be available once approved by a moderator.

error Your review cannot be sent